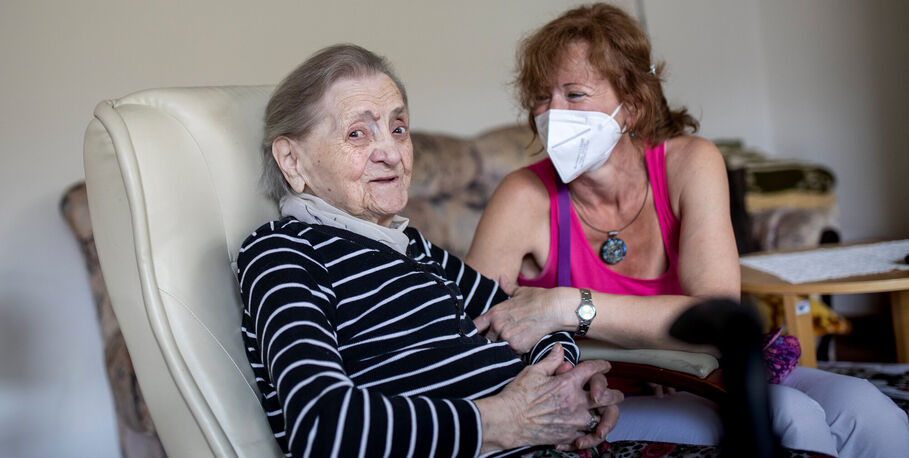 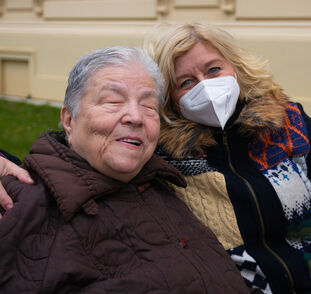 She senses the sun rays but she has never seen how the sky flares up with the shades of gold. She hears the humming of waves but she cannot admire the magnificence of the sea. Jarka, a client of the Sue Ryder personal assistance, has been blind since her birth. Yet, or perhaps therefore, she is always struggling to experience. Her eyes have names: Ivana, Martina, Hanka ...

Jarka is 72. She has been using personal assistance and Sue Ryder social services for four years. Personal assistants help aging persons with things they cannot manage by themselves – everyday activities, shopping, training forgetful memory. The benefit of this kind of assistance is that you need not go anywhere; it comes to you. We usually assist seniors at their home but visits to health or social facilities are not exceptional either. As in the case of Jarka who lives in Palata, the Prague 5 facility for persons with visual impairment.

She did not meet the expectations of others. However, she managed to fulfill her own dreams.

She was born in the sign of Aries and it also helps her fight everything the life brings. She has never seen. Until seven years of age she had been able to tell the light from the dark. Later, not anymore ...

“My parents worried for me terribly and forbade me to do anything. They did not take me with them when they went to the sea. But I did not accept these limitations. For example I wanted to learn to cook but my mother forbade me to do that. She was afraid I would get burned. So I was learning to cook from other blind persons.”

„The peculiarity in the world of blind persons is that different persons perceive their blindness differently. Someone may be annoyed but at the same time it also may be an excuse. There is no need to travel, no need to care for someone, no need for this and that … In my opinion the life of such a person is empty. I wanted everything! Family, children, experiences … I knew it was going to be hard, But it is about the variety of life and people should be able to accept it. True, you can have some limitation but you need not accept its borders. You need not narrow the corridor of your experiences. You need not meet the expectations that the society holds towards a blind person. That is, they will silently sit in a corner … It is about not to give up in difficult times and keep going. Sitting at home was not just good enough for me. And still today sitting in Palata does not suffice to me. That’s why I appreciate Martina, Hanka and the Sue Ryder personal assistance. Thanks to them I can have experiences.”

Travelling to the sea with her daughter

Jarka realized a lot of her dreams. She studied, enjoyed motherhood with her two children, worked, looked after the household. In her words, she experienced thousand problems but never gave up. She realized her travel dreams. She began in the tourist club TJ Zora. She loves village Podhájska in Slovakia and Hrensko in the Czech Republic. It was always her wish to travel to the sea and when she was fifty it came off for the first time. And later she again went there several times … Her favorite stays were in Greece and Bulgaria. Her best memories are of travelling with her daughter Ivana.

Ivana showed me all. She was telling me about everything. We travelled there by ferry, back by plane. I had always wished to fly. I had imagined how it felt when the plane was taking off. And than it happened but it was different from my imaginations. It was gentle and there was only some humming sound in my ears. After that it felt like travelling in a coach, but in my fantasy I had thought it would be very dramatic. Wild! Something like a merry-go-round.

Towards sounds, tastes and scents with Sue Ryder personal assistants

Over last few years Jarka’s physical power has been diminishing and she does not feel fit for large-scale travelling anymore. And it is yet another reason why Sue Ryder personal assistants visit her regularly at Palata. And together they still travel. However, on a smaller scale of a map.

„I think that for Jarka our trips are a rupture of stereotype. She has been without sight all over her life, therefore she does not tend to replace the sight with something else. She perceives the world from her familiar standpoint. She travels thanks to sounds, tastes, scents and my narration. I am describing everything to her and she says it is sufficient. She even does not need to touch things. Based on my words she forms a picture of how our trip looks like,” says Martina.

Martina also reveals which Prague locations are their favourites: „For example, we love to go to Strahov Garden or Charles Bridge. We love to visit the cafe Half Way. It is a therapeutic cafe where they train people with mental disorders in working and social skills. I describe to Jarka the hustle and bustle inside, the people, their desserts, and the fluffy cream on her favourite Algerian coffee. She likes the fact that she also helps others by visiting the cafe. And I am, for my part, trying to refrain from helping her too much. She dislikes to feel helpless. Therefore, I let her to do everything by herself. No extra care! She would not stand it. With us it is more like: left-three, right-five, one-hundred-and-fifty, right-three. Be careful! It is just like a navigator instructing a pilot during a car rally. And in this case the pilot is Jarka.”

They do not stop dreaming of travelling ..

Jarka would wish to go once again to Bulgaria, but this time she is aware that it will not be possible. Martina, for her part, desires to go to New Zealand. They lengthily and colourfully talk about their dreams. There is no end of travelling in their fantasies ...